Congratulations to the following members for the papers accepted by MICCAI2022:

Congratulations to the following members for the 3 papers accepted by ICRA2022 and presentations at  ICRA2022:

Godwin and Lalith are presenting at ICRA on site this year:
https://www.icra2022.org/ 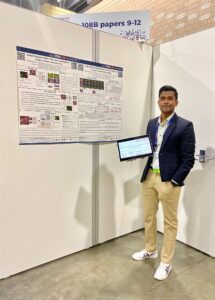 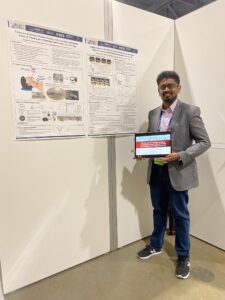 Congratulations to the following members for the papers accepted by ICRA2021 and presentations at pre-ICRA2021:

Congratulations to the following members for the papers accepted by ICRA2021 including 2 concurrently by RA-L:

Dr Ren gave a talk for NUS & U of Waterloo Workshop on Transnasal Surgical Robotics. 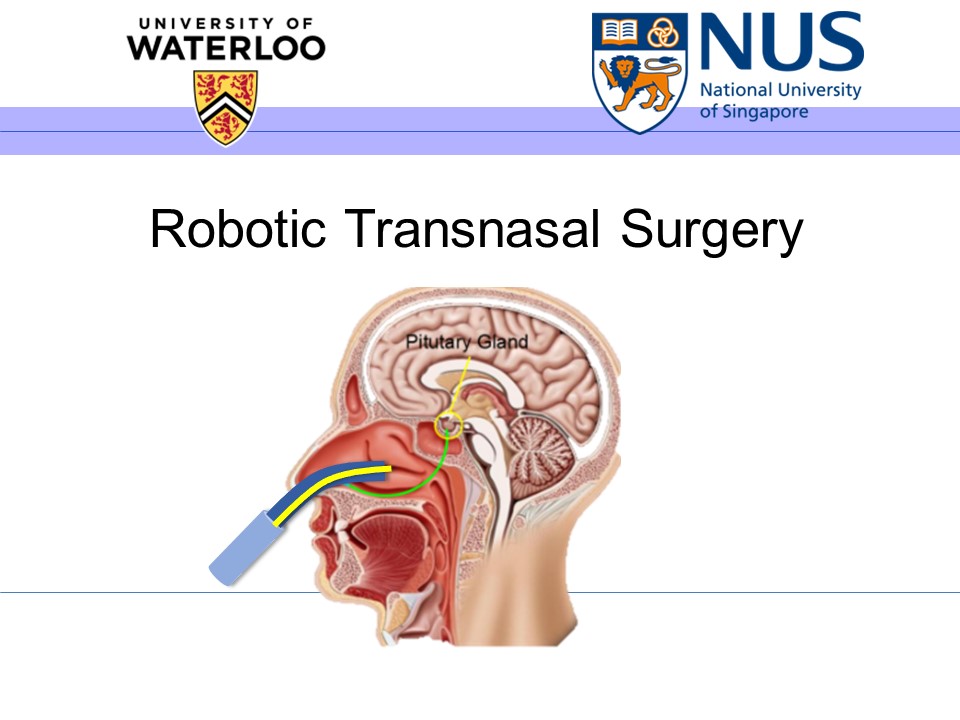 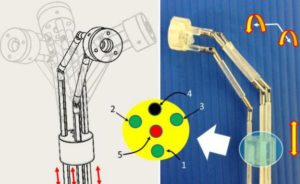 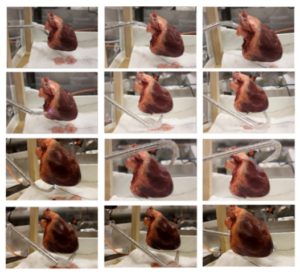 – EIH VS in free space – EIH VS inside a skull model

Trans-orifice minimally invasive procedures have received more and more attention because of the advantages of lower infection risks, minimal scarring and shorter recovery time. Due to the ability of retaining force transmission and great dexterity, continuum tubular robotic technology has gained ever increasing attention in minimally invasive surgeries. The objective of the project is to design a compact and portable continuum tubular robot for transnasal procedures. Several control modes of the robot, including tele-operation, visual servoing and hybrid control, have been proposed so that the robot is allowed to accomplish different tasks in constrained surgical environments.

Driven by the need for compactness and portability, we have developed a continuum tubular robot which is 35 cm in length, 10 cm in diameter, 2.15 kg in weight, and easy to be integrated with a micro-robotic arm to perform complicated operations as shown in Fig. 1. Comprehensive studies of both the kinematics and workspace of the prototype have been carried out.

Fig. 1. Prototype of the proposed continuum tubular robot.
The workspace varies on different configuration of DOFs as well as the initial parameters of the tube pairs. The outer tubes in the following cases are all assumed to be dominating the inner tubes in stiffness. Calculation of the workspace relies on the forward kinematics of the robot, and considers the motion constraints imposed by the structure. The workspaces of the 4-DOF robot with three different initial configurations are compared in Fig. 2 (Left). Since the spatial workspace has rotational symmetry, only the sectional workspace is displayed.

Fig. 2. Workspace comparison for 4-DOF CTR (Left) & 3-DOF CTR (Right) with three initial configurations. Top: all the outstretched part of the inner tube exposes; Middle: the outstretched part of the inner tube is partially covered by the outer tube; Bottom: the outstretched part of the inner tube is totally covered by the outer tube.
When the outer tube is straight, its rotation does not change either the position or the orientation of the tip. In this case, the robot degenerates to a 3-DOF one. Although decrease of DOF will weaken the dexterity of the robot, this configuration has its own advantages in some surgical applications. Take transnasal surgeries for example, as the nostril passage is generally straight, an unbent outer tube will facilitate the robot to get through at the beginning. Similar analysis of workspace is performed on the 3-DOF CTR with three different initial configurations, as shown in Fig. 2 (right). With different initial configuration, the workspaces also present different shapes.
In addition, tele-operation of the robot is achieved using a haptic input device developed for 3D position control. A novel eye-in-hand active visual servoing system is also proposed for the robot to resist unexpected perturbations automatically and deliver surgical tools actively in constrained environments. Finally, a hybrid control strategy combining teleoperation and visual servoing is investigated. Various experiments are conducted to evaluate the performance of the continuum tubular robot and the feasibility and effectiveness of the proposed tele-operation and visual servoing control modes in transnasal surgeries.

–Tele-operation of the compact tubular robot