Abstract—Soft robotics is a research field growing rapidly with primary focuses on the prototype design, development of soft robots and their applications. Due to their highly deformable features, it is difficult to model and control such robots in a very precise compared with conventional rigid structured robots. Hence, the calibration and parameter identification problems of an underactuated robotic hand with soft fingers are important, but have not been investigated intensively. In this paper, we present a comparative study on the calibration of a soft robotic hand. The calibration problem is framed as an AX=YB problem with the partially known matrix A. The identifiability of the parameters is analyzed, and calibration methods based on nonlinear optimization (i.e., L-M method and interior-point method) and evolutionary computation (i.e., differential evolution) are presented. Extensive simulation tests are performed to examine the parameter identification using the three methods in a comparative way. The experiments are conducted on the real soft robotic-hand setup. The fitting, interpolating, and extrapolating errors are presented as well. 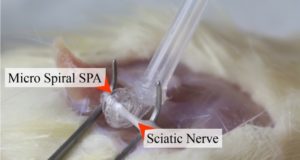 Guide wires are commonly used to assist surgeons during vascular surgery. Guide wires are usually the first to be placed, eventually allowing easy exchange of surgical tools to the target site. The surgeon has to manually control and manipulate the guide wire to the target region. This process is complicated by the tortuous nature of the vasculature and is made worse as the surgeon has limited vision (constant need to switch between overlay angiographs) and control over the guide wire tip (controlling the distal tip from the proximal end). For the first time towards minimally invasive Arteriovenous Fistula Angioplasty Procedures, we aim to improve the controllability of the in vivo guide wire via the attachment of a magnetic tip to the distal end of the guide wire, which under the control of external magnetic field generators can deflect the magnetic tip. This controlled deflection translates to the selection of entrance angle for the guide wire tip, affording distal control.
This is especially useful for navigating around stenosis which is common for patients with Arteriovenous(AV) Fistula. The repeated use of the fistula during dialysis has been claimed as a cause for the high occurrence of stenosis (due to tissue scaring from access). Fistulas and their grafts are however still preferred over other renal access in most situation due to its lower risk of infections. Our proposed system here can improve the controllability, safety and speed of current procedures and can enable AV-Fistula Angioplasty Procedures to be shifted to out-patient clinics.

Flexible robotic manipulators have been widely used in minimally invasive surgery (MIS) and many other applications requiring closer inspection and operation. Although a variety of manipulators enabled by different mechanism have been developed, few of them can preserve softness, thinness and decent bending capability simultaneously. We develop miniature soft robotic manipulators made of hyper-elastic silicone rubber. Along with the manipulator design, novel fabrication methods are proposed and elaborated. Detailed characterizations are specified to show the bending capability of the manipulator given different air pressure. Specifically, our manipulator, as thin as 6 mm, is able to achieve 360° directional bending, and, when given pressure over 70kPa, it can reach 180° bending angle and around 5mm bending radius easily. Due to its innate compliance and small dimension, this type of robotic manipulator can deliver safe and comfortable interactions with the subjects. More significantly, the novel fabrications in this paper diversify the fabrication methods for soft pneumatic robots and actuators (SPRA) and further scale down their sizes.
Continue reading

The overall objective of this project is to develop and evaluate the key technologies of Transnasal Artificial Tentacles, a new approach involving research on the tentacle-like robotic and sensing technologies. This is aiming to create a compliant, flexible, multiple-sensorized, immersive, intraoperative targeting and guidance system for constrained transnasal endoscopic surgeries in a confined workspace.
Minimally invasive surgery-based nasopharyngeal cancer treatment is promising, but currently, it is not a common treatment choice because of the absence of suitable tools. In this project, a multi-channel concentric tube robot is proposed for the treatment of nasopharyngeal cancer based on natural orifice translumenal endoscopic surgery. The proposed system has three channels, i.e. two manipulation channels and one vision channel, and all the three channels are confined by a 10 mm active sheath. The robot is controlled by human-in-the-loop bimanual teleoperation under active endoscopic guidance. The reduced sheath diameter and the steerable vision channel improve the functionality of the system and distinguish our design from the prior art. The feasibility of the system has been evaluated through a series of simulations and experiments. Results show that the proposed system is capable to conduct cooperative tasks in a confined space and the miniaturized manipulator is suitable for transnasal procedures. Besides, comparisons with other types of flexible surgical robots are discussed to further demonstrate the superiority of the proposed system in the target clinical applications.

Nasopharynx cancer, or nasopharyngeal carcinoma (NPC), is a tumor that originates in the nasopharynx, the uppermost region of the pharynx where the nasal passage and the throat join. It is a common disease occurring to ethnic Chinese people living in or emigrating from southern China; it is also the eighth most frequently occurred cancer among Singaporean men. Traditional posterior nasopharyngeal biopsy using a flexible nasal endoscope has the risks of abrasion and injury to the nasal mucosa and thus causing trauma to the patient. Therefore, the goal of this project is to develop a compact continuum tubular robotic system to achieve collision free nasopharyngeal biopsy.

Fig.1  Illustration of the proposed CTR for nasopharyngeal biopsy.

We developed a compact CTR which is 35 cm in total length, 10 cm in diameter, 2.15 kg in weight, and easy to be integrated with a robotic arm to perform more complicated operations.

We also developed a 3D printed biopsy needle to equip our robot for transnasal biopsy procedure.

The workspace of the robot was analyzed to determine optimized tube parameters.

Further more, by using an electromagnetic tracking system, we are able to build a navigation system with shape reconstruction for the tubes.

Three groups of experiments were carried out. The first group is to tele-operate the robot to follow a linear path and a circular path. We found that the path following accuracy was about 2 mm.

Fig.9 Tele-operating the robot to follow a linear path and a circular path

Fig.10 Accuracy of the robot following the predefined paths

The second group is to validate the shape reconstruction algorithm. The accuracy of the results is about 1 mm.

In the last group of experiments, the robot was tested in a biopsy procedure on a cadaver. The feasibility of the proposed robotic system was validated.

This is a local copy of the website: http://flexidiamond.blogspot.sg/

Nasopharynscope is a valuable tool in diagnosing Nasopharyngeal carcinoma in patients since 84% of patients display ulcerations.

Extension and contraction to evade obstacles

Flexible robots including active cannula or cable driven continuum robots are typically suitable for such minimally invasive surgeries because they are able to present various flexible shapes with great dexterity, which strengthens the ability of collision avoidance and enlarges the reachability of operation tools. Using model based control method will lead to artificial singularities and even inverted mapping in many situations because the models are usually developed in free space and cannot perform effectively in constrained environments. Therefore, the goal of this project is control the motion of a tentacle-like curvilinear concentric tube robot by model-less visual servoing.

Fig. 1. The experimental setup includes a concentric tube robot, a camera, a laptop, a marker and a target.

The visual tracking of the concentric tube robot is based on shape detection. The circular marker is attached to the tip of the concentric tube robot and a square target is given for the tip to trace. During the experiments, the coordinates of the marker centroid and target centroid are calculated while the next target position is calculated at the same time as shown in Fig. 2.

Fig. 2. Working mechanism of the system. Top: translations of the three tubes. Bottom: marker, final target and the next target position on the image plane.

Fig. 3. Overview of the control algorithm. The Jacobian matrix is estimated based on the measurements of each incremental movement detected from the camera.

The framework of the controlling the robot is shown in Fig. 3. The initial Jacobian matrix is acquired by running each individual motor separately and measuring the change of tip position of the robot in the image space. Then the optimal control is achieved by solving a typical redundant inverse kinematics. And finally the Jacobian matrix is continuously estimated based on the measured displacements.

To evaluate the proposed model-less algorithm, a simulation was carried out on MATLAB first. The desired and actual trajectory was shown in Fig. 4, from which it could be seen that the robot succeeded in following the reference trajectory and reaching the target position.

Fig. 4. Simulation of using the proposed algorithm to control a concentric tube robot.

The proposed algorithm was also implemented on a physical concentric tube robot in free space. It was found the robot was able to reach goal with zero steady state error in all trials as shown in Fig. 5.

Fig. 5. The concentric tube robot is able to reach a desired goal using the proposed method. Top: the motion of the robot. Bottom: the reference and actual trajectories of two experiments.