The fear of pain and needles deter some patients from seeking intravitreal treatment, which drives our group to develop an needleless device for performing intravitreal injections. A prototype for an electro-magnetically actuated needleless injector, based on Halbach arrays, is described and characterized in a lab setting. The implication of the prototype for needleless ocular drug delivery is investigated. This investigation is intended to eventually improve drug delivery of glaucoma medication enabling safe needleless approaches. We detail the design aspects of the injector and characterized the device with custom-made phantoms. It was observed that, despite delivering the drug bolus to the center, the viscous vitreous phantom indicated vorticities similar to counter rotating vortex pairs, which could damage the retina. The observed peak velocity during the phantom experiments was 6.1mm/sec at the retinal layer, indicating that the delivery bolus can impart shear forces to the retina via the vitreous.

The results comparing the measured Fz, the force in the normal direction to the sensor surface, and Mag, the magnitude of the force vector, across the various depths of injection and at the two voltage points.

Comparison between the four depths did not show significant differences:

Changing the distances between the sensor surface and the injection nozzle does not appear to have a distinguishable relationship. Note: each data plot is the average from 3 data samples. This is indicative of the following; regardless of the size of the orbital, the peak force observed is going to be dependent on the injectant properties. We note that more experiments should be done for characterization of distances between 20mm and 12.5mm, we did not test this range due to concerns over damaging the sensitive ATInano17, and hence the initial expectation of measuring 20 to 35mm and anticipating an extrapolate-able relationship. The rational for these distances assumes an orbital diameter of 25mm and the drug is delivered to the center at 12.5mm. The 25mm distance is likely to be near the retinal layer and 20mm would be in between.

The dimension of the vitreous phantom chamber is a cylinder with height 17mm and diameter of 25mm. This relates to a volume of approximately 8345uL. This is significantly larger than the vitreous volume in human eyes. Assuming the human vitreous to be 4000uL, the height of our cylinder should be 8mm. In such a scenario, the rotational symmetry in the spherical orbital is lost and hence the flow will be more a keen to a 2D planar flow rather than a 3D flow. Our selection of 17 mm was a compromise between maintaining the 3D flow while allowing an observable 2D slice of the injection profile. In addition, the selection of the 10.9 mm by 17 mm access point is arbitrary. Its purpose was to allow ease of filling and removal of vitreous phantom while maintaining the spherical shape as much as possible. The current dimensions relates to a chord at 11.25mm from the center of the circle, thus maintaining at least 95% of the diameter. 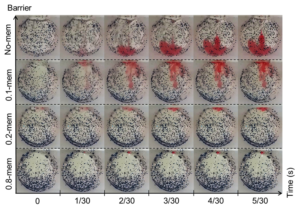